Kagi Charts are a specific type of chart composed of vertical lines (green for up and red for down) and small horizontal lines, that connect them. Similar to Renko Charts, Kagi Charts do not factor in time. Time intervals are completely cast aside as Kagi Charts only take price action into consideration. The word Kagi is derived from the Japanese art of woodblock printing. A Kagi or Key is an L-Shaped guide used to properly align paper for printing. Due to this, Kagi Charts are even sometimes referred to as Key Charts. The premise of Kagi Charts is fairly simple. Essentially, from the starting point (usually the first closing price), lines are drawn solely based on price action. The Up Lines (also called the yang lines) are formed during uptrends, while Down Lines (yin lines) are formed during downtrends.

As long as prices continue to move in the current direction, the current up line or current down line will continue. Once price reverses enough (the necessary reversal amount is set by the trader), a horizontal line is drawn and then a line is drawn in the opposite direction of the previous line, stopping at the new closing price.

There are five different types of lines that can be drawn within a Kagi Chart.

TradingView Kagi Charts use absolute values to determine line reversals. A price movement in the direction opposite of the current line, that exceeds the user defined reversal value, will cause a horizontal shoulder or waist to form along with a new line. The upside to using absolute values is that it is very straightforward and it is easy to anticipate when and where new lines will form. The downside is that selecting the correct reversal value for a specific instrument will take some experimentation.

Kagi Charts are a popular charting choice because of their ease of interpretation. Because they do not take time intervals into consideration at all, they have a way of factoring out the associated noise. When price movement is the only variable that matters, the creation of new lines gains importance. Price movements typically need to be substantial to register a line change and therefore should always be noted. Natural, small price variations that occur naturally over time can therefore be disregarded. Some common, everyday applications for Kagi Charts are basic line reversal trading signals, support and resistance discovery and a sequence-based reversal pattern.

Up Line/Down Line Reversals — Steve Nison, who brought popularity to Kagi Charts, offered the most basic interpretation of the charts. It is simple, buy in yang, sell in yin. Basically, buy in a reverse to an up line and sell in a reverse to a down line.

Nison himself proposed a trading signal, which entails waiting for a sequence of nine (mostly) consecutive shoulders or waists. Traders should then look for a reversal opportunity after the ninth shoulder or waist is drawn. 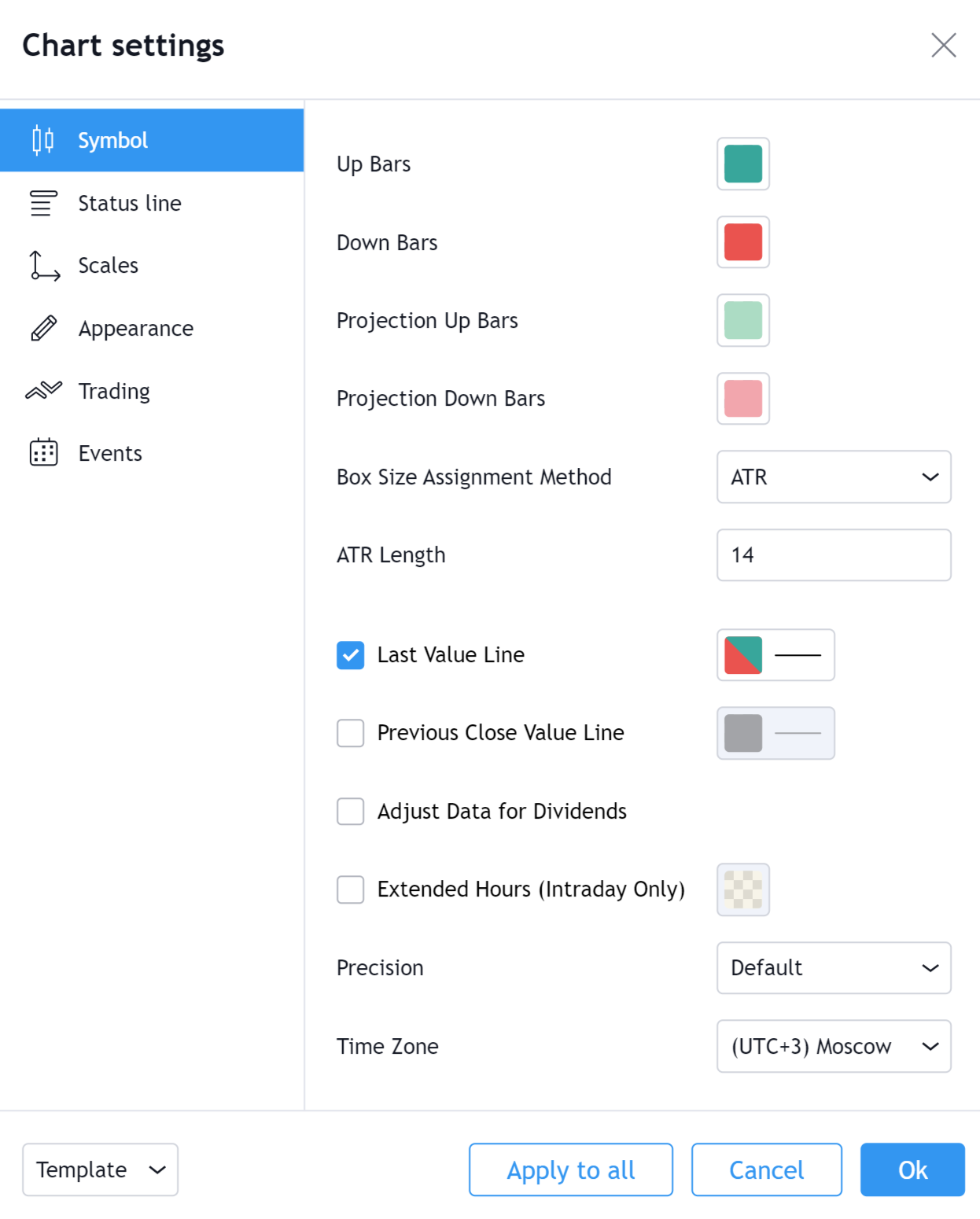 Up Bars — change the color and outline of Up Bars.

Down Bars — change the color and outline of Down Bars.

Reversal Amount — this value sets the size of a move needed to draw a new line in a different direction.